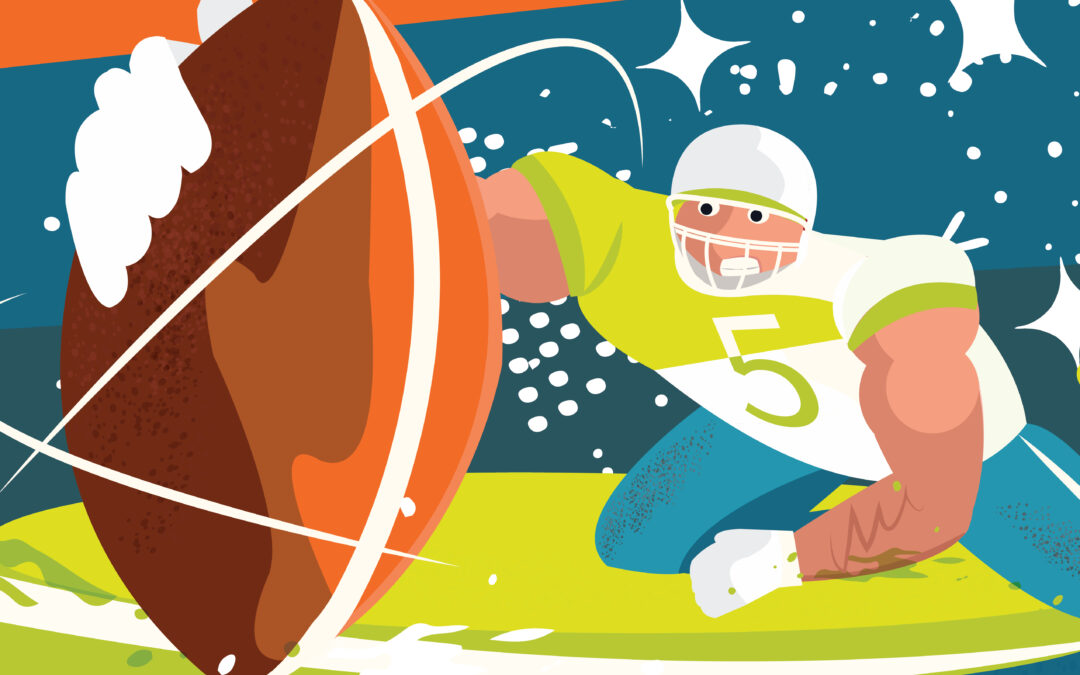 People have always gathered around the water cooler (physically and metaphorically) on the Monday after the Super Bowl, sharing their thoughts on which ads “won,” a subjective choice based on informal criteria—which ads were the funniest; which ads were the most heartwarming? Which ads made us think about something besides ourselves?

With the rise in social media, the opinion sharing and buzz building goes on for days. As always, people reveal something about themselves in the process. Here’s an example of what is being discussed Ignite2X.

Andy:
Another Super Bowl has come and gone, which means I must begrudgingly admit Tom Brady is the undisputed GOAT. Gloat, if you want.

Maureen:
I’ll just let his MVP performance speak for itself. There are no adjectives left to describe Tommy.

Andy:
But I wonder, is Super Bowl advertising even relevant anymore? With a $5+ million price tag for 30 seconds, it’s out of reach for 99.9% of brands with CPG budgets. This year the tone was a little more serious, with ads being a reflection of the current culture and zeitgeist. It’s apparent that marketers were concerned about striking the right tone during a pandemic. A few companies made a statement by not participating the same way they did in the past, even dropping out of this year’s Super Bowl, like Pepsi, who of course did sponsor the half time show, and Budweiser. Thoughts?

Maureen:
Well, you know me and the beverage category, I always have thoughts, especially when it comes to beer. Anheuser-Busch (AB), arguably the most famous and revered Super Bowl advertiser of all time, shocked the business world a few weeks back by announcing that they would not be promoting Budweiser during the big game. Instead they planned on donating the money earmarked for airtime to a Covid-19 virus vaccination initiative. What, no Clydesdales? No Wassup? This is quite the departure from Bud ads in the past. As you can imagine, the news media was all over this, generating a ton of exposure and goodwill. But it’s not as if the AB company went dark.

Anheuser-Busch was all over the Super Bowl broadcast, just not the flagship Budweiser brand. They ran light-hearted spots for Michelob Ultra Organic Seltzer, Bud Light, Bud Light Selzer Lemonade, and AB’s canned cocktail brand Cutwater Spirits. And there was AB’s first corporate spot, “Let’s Grab a Beer” (the message being that sharing a beer is a warm gesture, helping people connect and get through the tough times, like losing one’s job during the pandemic). It will be interesting to see how they position Budweiser—and their other brands—over the next few years.

Maureen:
Speaking of positioning, what did you think of the Jeep spot—two minutes long and featuring Bruce Springsteen? I know you have some strong opinions, and not just because you are a fan.

Andy:
This is more than a commercial; it’s really a short film, beautifully executed, with a message to deliver to all of us—a far cry from the typical car ad showing a sleek car on a curvy road with the ocean glimmering in the distance. It’s not even about cars. It’s about how we live today and patriotism, acknowledging that this idea means different things to different people. Jeep is a quintessential American brand, rugged, reliable, and hard-working, and it helped us win World War II. Bruce is also a quintessential American product, known for Born in the USA and Nebraska. What’s more, he’s the ultimate storyteller. But his partisan views are polarizing, and it was a gutsy move by the Jeep company to partner with him.

The main message is this: despite the differences, we are all Americans, and we can find (and should) find common ground. While the narrative avoids overtly political sentiments, this ad has become a lightning rod for some conservatives. Reading the comments on social media (admittedly not a proxy for all Americans), the spot evokes different feelings from different people, and while there were many fans, there were also many current Jeep owners who vocally denounced the messenger as too partisan.

It certainly gives people a lot to talk about. But I am betting that the folks at Jeep feel that are the perfect vehicle, pun intended, to speak to American values and the Re-United States of America. I am biased here. For a fan like me, Bruce in a Jeep created conversation. It’s not like he had ever endorsed a product line before.

Maureen:
Yeah, but priceless costs a lot of money on Super Bowl Sunday. While we’re on the topics of automobiles, let’s discuss the GM ad touting EVs (Electric Vehicles). When competitors react immediately with campaigns of their own, you know you have struck a chord.

Andy:
At first glance, the GM spot (which begins with Will Farrell punching a globe) and the Jeep spot could not be more different. But they both are communicating a higher-level message. For GM, I think it’s focus in on getting people comfortable with the idea of electric cards without the heavy handed, environmental overtones. For the most part, ads for electric vehicles are educational and fairly serious in tone, if not a little holier-than-thou. Tesla came along and added sex appeal and a higher price for a niche audience. While the Volt was an expensive EV entry point for GM, they need to appeal to the masses, especially since GM has a goal of being all electric by 2035.

Choosing Will Farrell, the embodiment of average-guy ridiculousness, as a spokesperson was brilliant for a campaign called “Everybody In.” Farrell goes over the top while expressing outrage that Norway, of all countries, is beating the US in the number of electric cars owned per capita. It tweaks our national pride while disrespecting another country (small, wealthy, progressive) in the process. Pre-Super Bowl teaser spots delivered more insults.

The response was swift. Ford of Norway demonstrated their sense of humor by engaging in a Twitter feud with GM via social media, and Audi went so far as to create its own elaborate TV spot, a tongue-in-cheek video featuring a popular (and Norwegian) Game of Thrones character. Audi has fun with asserting their superior position as the top selling electric vehicle in Norway. It’s pretty special when a competitor spends money to create awareness for your brand. Investors appear to like what they are seeing. GM shares are up more than 45% over the past three months.

Andy:
Harder to understand was the Oatly spot? It had a lot of people scratching their heads. Is bad the new good? The reviews are in and so, the spot stands out for being painfully effective without any pretense of being storytelling.

Maureen:
To misquote Pilonius in Shakespeare’s Hamlet, I think there’s a method to their madness. As you well know, there have been tens of thousands of “better for you” food and beverages introduced in the US over the past few years, and a common positioning for these newer brands is wholesomeness, honesty, and a sincere tone, to resonate with their target audience of consumers who embrace the wellness lifestyle. What we at Ignite2X call the “arms wide open” positioning (because they often feature photos of people with their arms raised in joyous freedom). Oh, please.

Oatly understands this. They are a Swedish company, and they arrived in the US market with that healthy, no nonsense Scandinavian image intact. And what a market! Even though the non-dairy milk category is relatively new, it is well established because of savvy marketers like Almond Breeze and Silk. But there is still tremendous growth opportunity, as more and more mainstream consumers (and Tom Brady) recognize the benefits of milk alternatives for health and the environment.

Oatly’s stated strategy is to own oat. But delivering on that promise is the challenge, because to own a market, you need to achieve household penetration in a big way. You need to reach households all across America, get in people’s faces and make them remember you.

I’m pretty sure they accomplished that with their Super Bowl spot seen by 90+ million people. The 30-second spot featured the vocal stylings of Oatly CEO, Toni Petersson, who also who wrote the music and lyrics to “Wow, No Cow.”  And it was terrible. Not just off key, but awful. Horrendous. It was voted among the worst Super Bowl spots in several surveys. But in this case, “worst” was “best.” People can’t stop viewing, sharing and talking about this spot. Mistake no mistake, this was the intention all along. Oatly has made spinning negative feedback into an art form, and irreverence is part of their DNA.

Maureen:
Returning to your question, “Is the Super Bowl even relevant anymore (for brand marketers)?” I say yes, perhaps more so than ever. Super Bowl is not just a football game, it’s an advertising showcase—secular holiday marked on everyone’s calendar and enjoyed by consumers in every single market in America. It attracts people of every age, ethnicity, education income level and political affiliation. It is the one time of year when people actually look forward to watching and re-watching commercials (thank you YouTube), so that they can debate and share their views, especially on social media.

There is nothing else like it if you need to create awareness. Is it expensive? I could argue it’s underpriced.

Andy:
I’ve been on a few Super Bowl ad panels and almost always they start with how mediocre this year’s ads were in comparison to other years. This year is no different. I saw a chorus of wise sages bemoaning the decline of creativity. In a year that could have cancelled the game itself and the ads that made the second half bearable, I’d say there is always something to love or hate every year.

In a pandemic, let the lemons be funny and let’s look forward to having a beer together soon. Oh, and bring back the animal ads. It’s something we all agree on!

Maureen:
And the Bruce Springsteen incident that hit the news this week demonstrates the power of celebrity, for better or worse. This gives us something else to talk about, next time.